Warning: Use of undefined constant php - assumed 'php' (this will throw an Error in a future version of PHP) in /home/customer/www/redresssolutions.co.uk/public_html/wp-content/themes/redress/header.php on line 1
 Redress Solutions - Page 4
T: +44 (0)20 7495 3900 / 5311
E: enquiries@redresssolutions.co.uk

Marius Nasta, Chief Executive of Redress Solutions, will give a presentation on the latest developments in third party litigation funding to members of the NECCBA at a meeting to be 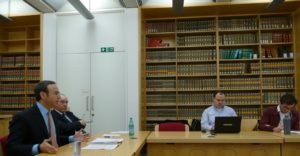 At the invitation of Professor Neil Andrews, Deputy Chair of the Law Faculty Board at Cambridge University and a Fellow of Clare College, Marius Nasta delivered a lecture on third

Another success for Redress

Redress agreed to provide finance to a claimant who brought a claim under an introducer agreement. The defendant deliberately hid transactions with parties introduced by the claimant in order to

The Times newspaper of the 1st December 2016 featured in its Law section an article on litigation funding. The author of the article, Edward Fennell, reports on the fallout from

It is with immense sadness that we record the passing of our late Chairman, Stephen Adamson, CBE. Stephen’s wisdom helped to guide us in the early years of our business

Redress Solutions PLC and Queens’ College, University of Cambridge to host the second Queens’ Distinguished Lecture in Law to be delivered by Lord Grabiner, QC at Queen’s College on 19th October 2016

The Sunday Times newspaper of the 25th September 2016 featured in its Business section an article on litigation funding. The author of the article, Oliver Shah, reports on the story

Marius Nasta, Chief Executive of Redress Solutions, features in the September 2016 issue of Financierworldwide.com, a leading resource for corporate finance intelligence, with an article on third party litigation funding

Another success for Redress

Redress Solutions agreed to provide finance to joint liquidators of an investment company whose creditors included a major international bank (the “Bank”). A fraudster, an ex-officer of the Bank approached

Keep up to date with Redress Solutions' News by subscribing

Warning: Use of undefined constant php - assumed 'php' (this will throw an Error in a future version of PHP) in /home/customer/www/redresssolutions.co.uk/public_html/wp-content/themes/redress/footer.php on line 1